Saturday was a day like any other (well, at least like any other where there are sharks around): a morning of data processing, an afternoon swimming with whale sharks.  The sharks were plentiful that day, with multiple sightings, and in the end we had to leave with multiple sightings still being reported by our pilot.  As we headed back around the southwest coast, we contacted the pilot to request a fly-by.  The only response we got was, “Brace yourselves!”

A bit confused, we watched the skies.  From out of the blue appeared not only our microlite, but two other aircraft: a gyrocopter, and another microlite, this one with a small boat attached to the bottom! 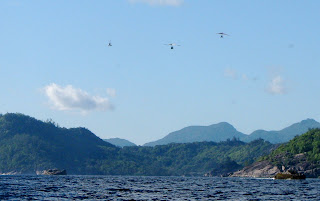 A trio of microlite aircraft line up for the fly-by!

Slowly they circled lower, joining forces in the skies, until, to our eyes, they looked to be almost flying on top of each other. 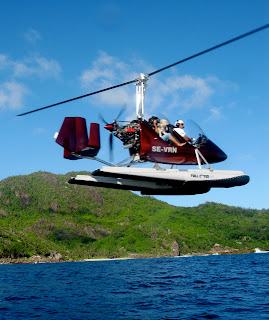 Coming in low over the water, first the gyrocopter passed us, with a dog in the passenger seat.... 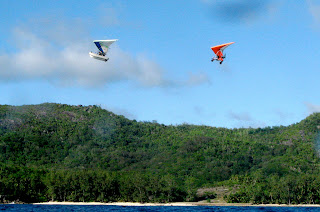 Followed by the microlite-boat and then our own microlite under the command of Neil, before the trio climbed back into the air. 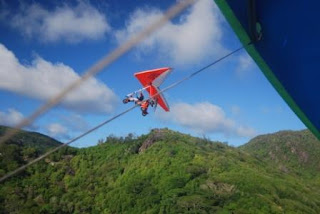 A rather unusual view of Neil taken by Fred Moinet in the 'flying boat'!

The clients on the boat loved it, as did we, and it was a fantastic end to a fun day of whale sharking.  Now we know the next time the pilot says “Brace yourself!” we’re in for a treat.

Posted by The Marine Conservation Society, Seychelles at 9:44 AM No comments:

Just as we had resigned ourselves to the fact that the whale sharks had fallen out with us and decided to abandon the Seychelles entirely, a call from Neil changed everything. A lonesome shark was spotted on a morning survey flight, and while the pilot could not find the shark again when they returned later in the flight, and while we did not take a boat out to look for it that afternoon, our hope was restored.  Indeed, hope burgeoned when we learned the Save Our Seas team had found the shark again later in the day, and when the pilot had a repeat sighting the next day our excitement was uncontrollable.  Indeed, this first glimpse of a large shadow beneath the surface of the water foreshadowed five fantastic days of sharking. 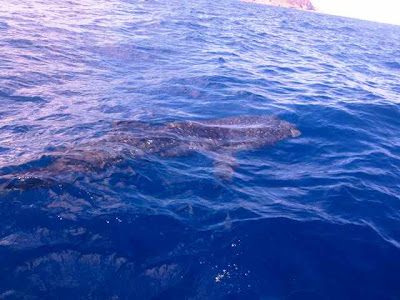 That first spotty shadow was such a relief!!

We were in our element, with sharks galore! We had nervous sharks that didn’t hang around long and several sharks that wouldn’t leave us alone. This isn’t just a charming experience but also gives us chance to collect loads of data and take lots of photos. 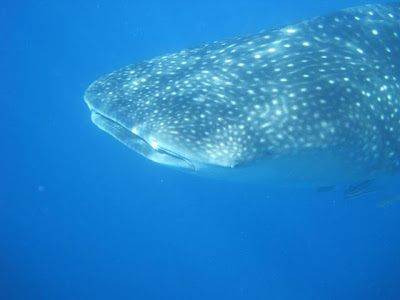 Some even stuck around with us so long that several groups of people got the chance to swim with them! This is something we call “hand-balling”. It means swapping one group out and putting another in. As the Whale shark encounter code states that we should only ever have 8 people in the water with the shark at one time. This can prove to be a bit difficult when you have an inquisitive male shark that wants to investigate you. But it is rather amusing to watch the Benny Hill style sketch unfold before you, with sharks following people and people following sharks. 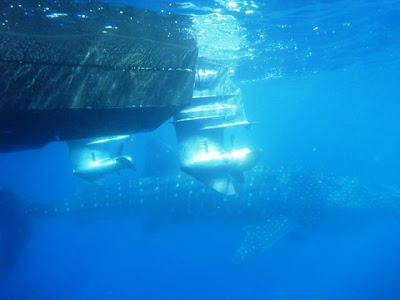 They were even sneaking round behind the boat...

This week was nothing short of spectacular, the radio was constant with news of the magical spotty creatures popping up everywhere! At one point, just as the shark I was with disappeared into the depths, I saw a shadow looming in the distance and was soon approached by another, without ever leaving the water. We experienced moments we will never forget, even being fortunate enough to see a couple of Manta rays! 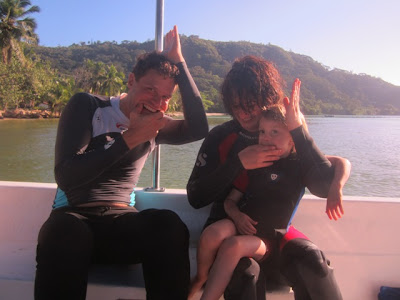 Lots of happy people making whale shark faces, even though our youngest isn't too sure about it!


The boat was filled with joyful faces and we were delighted to share some very close encounters with our favourite fish! Peaking at a total of 11 encounters in one day, with our longest lasting 35 minutes!! (A very friendly young chap indeed!). 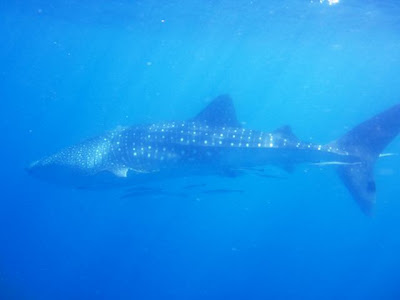 Back in business with lots of photos to ID... Whoopeee!

We have certainly had our hands full with some very successful shark trips, as well as having lots of data to analyse and are very happy to finally be busy with shark work!

Posted by The Marine Conservation Society, Seychelles at 12:44 PM No comments:

Time Heals All Wounds... Whether Chaucer was talking about emotional or physical wounds, we know one thing is true; time is definitely a plus for the physical. An integral section of the whale shark monitoring program involves the identifying of large spotty fish for population dynamics around the island of Mahe Seychelles. However, each encounter also involves the collection of pictures of each nick and abrasion of our hungry friends. With years of post-traumatic evidence in our database, we are able to track the healing progress of our recaptured sharks.

Why am I rambling on about what you avid whale shark blog readers already know? Because lately I’ve been assigned to a side project which handles this graphic library of wounds and must assign a label to what each shark has encountered. Speed et al. 2008 have done this with several whale shark aggregations (Australia, Seychelles and Mozambique) and have compiled a list of categories for each scar to go in. Long story short (although a very interesting read), major and minor are the two classes of categories; major being anything life threatening and minor being any shallow or superficial scrapes if you will. Sey2010.031 as seen in September of 2010 with some very painfull looking lacerations across the gilll slits.

During our week long whale shark extravaganza, a not so curious shark was encountered with. With the encounter code being kept, all guests were on the right side and as spotter I was desperate to get to the left for proper ID shots. Upon much frantic swimming, I achieved reaching the left and that’s when I saw it; a rather impressive dent upon the gills. After quickly snapping photos, the shark dove and the encounter ended. The next morning, the photos were I3S’d and lo and behold; Sey.2010.031 was our mystery shark. Every photo (left gill shot, left fingerprint, right gill shot, right fingerprint and the healed scar) was put into its respective folder in the Iris database. When reviewing past scar photos, we can see the gruesome lacerations upon the gill slits.

Why is this exciting? At 14:50 on Sept. 7th. 2010, the 31st new whale shark of 2010 was encountered off Matoopa Point and seen with a life threatening gash. Trauma around the head and gill slits can severely affect the life span of Rhincodon typus seeing as this particular injury hinders the proper filtering of the nutrient he seeks in our rich Indian Ocean waters. But ho! What was thought to be a doomed shark hath now returned to Mahe to feed and be a part of the magnificent Seychelles aggregation (though not so magnificent around Mahe this year). He was seen again off South Mahe on the 17th October alive and doing very nicely, thank you! 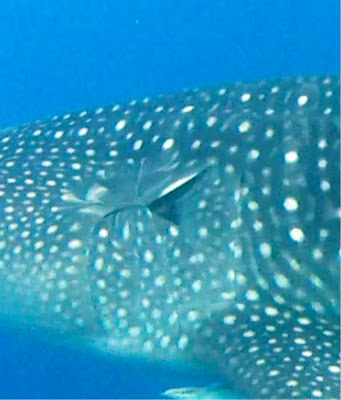 Here he is this year with the lacerations healed up, though not the prettiest of sharks!

We can extrapolate from this that perhaps this injury was not Seychelles related but on his crossing over to feast around this tropical archipelago. Which unfortunately strengthens the question of where do these magnificent creatures go when not partaking in planktonic feasting. This gauntlet of predators and boats; where does it lie and how often does it occur? Satellite tags have of course given us a clue and hopefully more tags to come.  Here’s to many more years of research and heartier aggregations with tagging for mapping of this migratory creatures. Here’s to you sey.2010.031; hope you come back next year!

A season with a difference

Regular readers of the blog would have noticed that despite this being the peak of the Seychelles whale shark season there have been very few posts... The reason is basically that there has been a major lack of sharks. The beginning of September brought two hopeful days with shark sightings and reasonable conditions but then a period of three weeks followed where rain stopped play and thereafter we had several weeks of glorious wind and rain free days, fantastic in-water visibility, but no sharks whatsoever...

Things went from bad to worse when our main supporter, the Underwater Centre, was burnt to the ground by a fire in the kitchens of the adjacent hotel pizzeria. 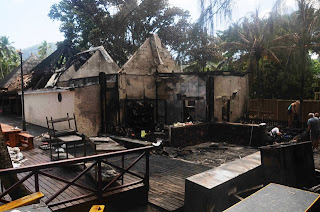 However, with a lot of hard work from staff and the MCSS interns the centre was able to resurrect itself from the ashes, and with it the sharks came back! Last week was good with multiple sharks in the south and several old friends coming back to visit... 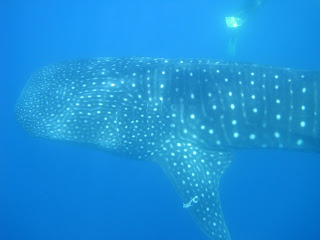 At last a whale shark!! Things are looking up!

So apologies for the hiatus but there will be several posts coming along with more inspiring stories of our big spotty fish. 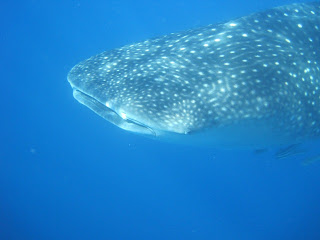 There's lots of people pleased to see you guys again!

Posted by The Marine Conservation Society, Seychelles at 10:46 AM No comments: