Seeing Spots – and Lots of ‘Em!

An interns view of the Djibouti expedition...

“There’s three here, two over there and another two coming from over there” – not something you expect to hear when out on a small boat looking for whale sharks, but something I got used to hearing during a week in Djibouti. I know about schools of fish and pods of dolphins but a swarm of whale sharks – that’s new to me! It’s also likely to have you seeing spots when you close your eyes at night!

So, how did it all begin……….one of those random searches of the internet found me reading the MCSS website and the heading “New - Djibouti Whale Shark Expedition” caught my eye. It was only a month away but with some hurried enquiries and lots of grovelling to my wife I managed to snag the last remaining place as a volunteer on the second week. 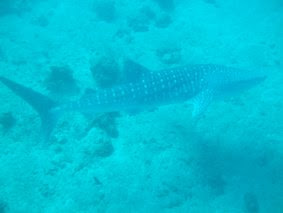 A really small whale shark of around 2 metres length, photo Mark Bradfield
On meeting up with David, Katie and Luke in Djibouti it was obvious the first week had gone well – having logged so many shark encounters they looked shattered and were still processing data from day 1. After a quick explanation as to how things would work once out on the sea we headed off to a great local restaurant “The Melting Pot” to meet up with the rest of the group (and drink a little rum punch). 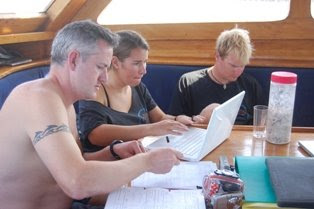 Mark learning the data handling routines from Katie & Luke
Transfer to the boat went smoothly and it was bliss to be out on the water heading for our destination, just time to unpack and check out the boat before we arrived and anchored about 100m from the rocky coastline. Having had a look at the data sheets and talked through the specific area of the shark to photograph for the photo database and features to look out for such as scars, accompanying critters, approximate length and sex I was ready to go. Boy was I unprepared for the frenetic activity of the next hour. That first trip out in the skiff put us straight on the sharks with our first encounter within minutes as we spotted the tip of the tail and dorsal breaking the smooth surface of the water. With three encounters in the space of five minutes I soon realised it was hard to store accurate information for each individual shark in your head when so many sharks were coming along in quick succession. Some words of wisdom from Luke and I adopted his system of using my fingers to denote length and sex and taking photos of this information so that all data was stored on the camera. It was then necessary to take a spacer shot between each shark studied so that it was possible to sort the photos later into each individual encounter. 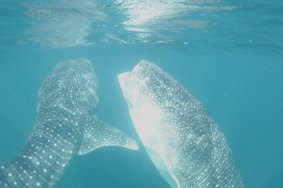 Whilst obtaining this data I was enjoying the real privilege of swimming alongside the biggest fish in the sea (albeit baby ones!) and observing at close quarters their natural feeding activity. Some sharks seemed completely oblivious to my presence and either cruised along at a steady pace with mouth open “ram feeding” or hung almost still except for their pumping gills, vertical feeding. Three sharks hanging in very close proximity vertical feeding was a great sight to behold and getting bumped by a shark while I was at the side of the boat talking to Luke was also memorable. Some sharks were very intrigued by us and came right up for a closer look and were happy to hang around for a while. As well as the identification photos I was taking, there was time occasionally to get some “fun shots” and video footage. Not always easy trying to get a decent photo of a fish that is 4 metres long, swimming relatively fast through fairly cloudy water (a wide angle or fish eye lens is definitely advantageous) but I came away with a few shots that will make friends jealous. 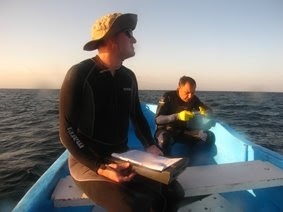 Mark recording sightings for one of the encounter sessions, waterproof record sheets to hand...

Days fell into a routine of activity with 2 or 3 sessions out on the water either photographing sharks or filling in data sheets followed by on board activities such as transcribing the data and sorting photo files into separate encounters on the laptops. With of course some great meals in between (the catering way surpassed my expectation) and a little alcohol consumption, dancing and lots of talking shark. I did feel a little ineffective in the evenings as my computer skills aren’t great and due to the pressure of processing such a large amount of data, Luke and Katie found it easier to get their heads down and crack on without me. Those MCSS guys may have a dream job but they sure worked hard during the trip!

Even the evenings were not shark free as we had a spotlight positioned at the back of the boat that soon attracted plankton and eventually a whale shark would turn up, sometimes fleetingly but occasionally to stay feeding for hours. One memorable evening three sharks were hanging vertical feeding under the light and the Save our Seas cameramen had finished filming so I grabbed the opportunity to go in. Snorkelling around three feeding whale sharks at night with the light from the spot filtering down through the water was my most memorable experience and I got some fantastic photos (by my standard!). 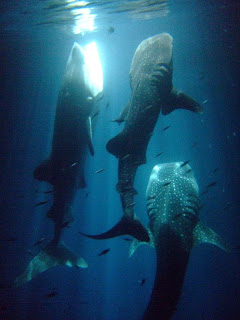 The three night time dancers under the flood-light, photo Mark Bradfield
There’s lots I haven’t even mentioned, such as the cruise up into the Ghoubet, the visit to Lac Assal (and the purchase of a certain salty goats head), the (mostly) memorable evening spent at the “Scotch Club” and the very enthusiastic on board dancing of a certain Frenchman (you know who you are Michel!). All fantastic fun and the whole trip was just so well run and packed with memorable events and places. 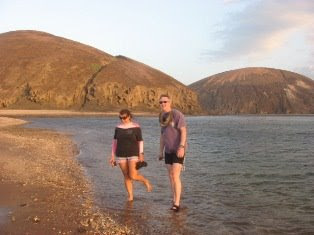 Mark and Katie landing on Devil's island in the Ghoubet Kharab (Devil's Goblet!)

But how to sum things up……………Well, 23 whale shark encounters in a two hour session for me sums this place up. It is a special place and obviously a very important place for the whale shark. Much remains unknown about why they are here, where they come from and where they go next. I for one would love to know the answer. Hopefully the data obtained will help answer these questions but no doubt more data will be needed and I just might be tempted to go and see just a few more spots……….Thanks again to all from Megaptera and MCSS plus the crew for a fantastically well run, enjoyable and rewarding experience.

Whale shark enthusiasts cannot have missed the furore that was caused by the capture and internment of a juvenile whale shark as an attraction in a huge glass tank at the Atlantis hotel on Dubai’s Palm Jumeriah.

The 13 ft female whale shark was caught on August 20th last year "supposedly" struggling in shallow water. The hotel’s story is that the shark was put in the aquarium for "medical care and observation" and that they would release her. But now five months later Sammy, as she has been named, is still in captivity and the managing director of the hotel, Alan Leibman, was reported saying that they had no plans on releasing the whale shark.

The capture of the shark roused an enormous public outcry in Dubai, which is almost unknown in this advanced Arabic state and prompted the launch of a ‘Free Sammy The Whale Shark’ campaign supported by a Facebook group site. Many local conservation groups took up the campaign and in October Dr Rashid Ahmad Bin Fahd, the Minister of Environment and Water, said the shark will have to be released, but to date the hotel have not complied.

During this last week the World Wildlife Fund has also stepped in demanding the shark’s release but it seems that the hotel isn’t talking to anyone about Sammy: “We have repeatedly tried to contact Atlantis directly and to this day our calls have never been returned” said Lisa Shrake-Perry, UAE World Wildlife Fund conservation programme manager in a letter to campaigners this week.

Tourism operators are also joining the Free Sammy campaign as local newspaper 7 Days reports that a German tour company Takeoff Reisen is boycotting Atlantis Hotel until it agrees to release the shark. Manager Thomas Lohrer advised that his company had received numerous requests for Atlantis but he refused to make a reservation: “I have told my clients that I am not willing to support this tragedy. Most of my clients booked either a different hotel or a different destination”. 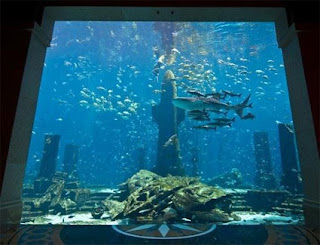 The Atlantis Hotel opened to the public with a lavish party attended by 2000 invited guests and rumoured to have cost $20 million. The party on November 20th featured a performance by Kylie Minogue which promptly caused UK charity Marine Connection to drop the singer from their list of supporting celebrities, but not because of Sammy… the hotel also has 20 captive dolphins which the paying public can swim with… these dolphins were captured from the waters surrounding the Solomon Islands.

Meanwhile local conservationists are becoming concerned that Sammy is actually becoming quite sick and Atlantis may indeed be planning to release her, rather than risk her dying in their show tank!

And so while the name of Atlantis conjures up images of a marine utopia, the resort itself is becoming a bit of a pariah and a symbol of arrogance that Dubai’s reputation does not really need.

If you feel that you want to do something positive to Free Sammy then log on to the Facebook site or write a letter to the relevant UAE authorities:

Our thanks to the Free Sammy the Whale Shark Campaign for keeping this matter in the public eye and for the information in this article.
Posted by The Marine Conservation Society, Seychelles at 5:32 PM No comments: