Savi Leblond takes you into the second week of our Djibouti expedition...

Week 2 was looking to be a daunting one with one of the team members down with dengue fever, but with the aid of Erica Wenzel and Dan Drahozal from Dolphin Excursions we managed 375 encounters for a grand total of 783 encounters in 9 successful days of “sharking”. 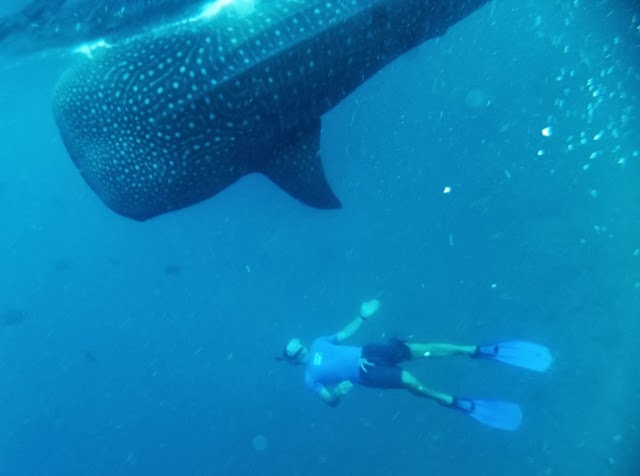 Dan getting to grips with gender identification!

The encounter code clearly states that for the safety of both the animal and the human to respect a minimum 3 meters from the body, and 4 meters from the caudal tail. Seeing as whale sharks don’t read their own handbook, all regulations and advisory cautions seem to be defenestrated by the whale sharks themselves in their everlasting quest to feed in however which way.

One exceptional afternoon (all the sharking sessions were amazing of course but this one ranks top 3), we managed to see the feeding chaos which resulted in individuals ram feeding in haphazard patterns around 5m below the surface, totally without regard to those vertically feeding who were then also further disturbed by individuals whizzing past actively surface feeding. The ensuing chaos erupting into bouts of antsy tail thrashing. Somehow I kept my cool and managed to get the photos necessary but still wanting to explode in laughter being in such an elated state. Before it was all over however, I managed to see our shark friend that had a trinket of interest. On the leading edge of his lower caudal fin there was a horizontal gash in which was lodged a long piece of nylon mono-filament fish netting. Doubting that this is some gang related sign to warn off other whale sharks (though another individual sports a fishing hook resembling a small anchor in his left flank- all that’s missing is the “I love mom” tattoo), I hoped to see this fellow again and have the chance to remove aforementioned netting. 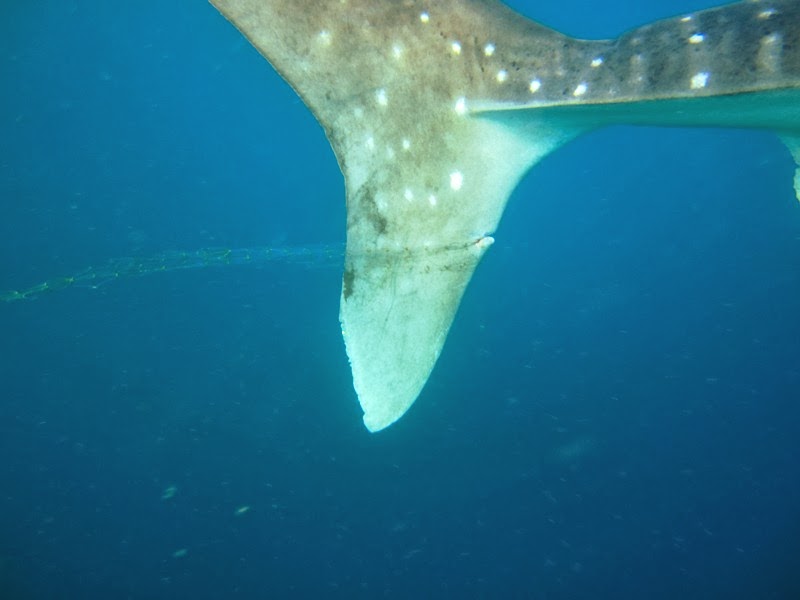 During the feeding orgy this fellow (now identified as dji.2007.018) was holding his ground, err water, and vertically feeding. For once he wasn’t actively surface feeding or felt the need to play the fastest game of cat and mouse (shark and human?) and I took my chance. Diving down and stabilizing myself so as to do this hastily and least invasively (seeing as his caudal tail appeared twice my height and a reflexed slap to the body wouldn’t exactly be the most ideal), I pulled up and felt it was quite lodged in his flesh. Running out of air and not knowing of having this opportunity again, I repeated with slight more force and his caudal and netting became separate entities once more. Minimal reaction (just one swish of the caudal, moved one meter away and continued feeding), and I was back on the surface feeling pretty darn chuffed. Reality set back in as a few more sharks zoomed past however and they made for some fun hand signals at the end of each shark encounter. 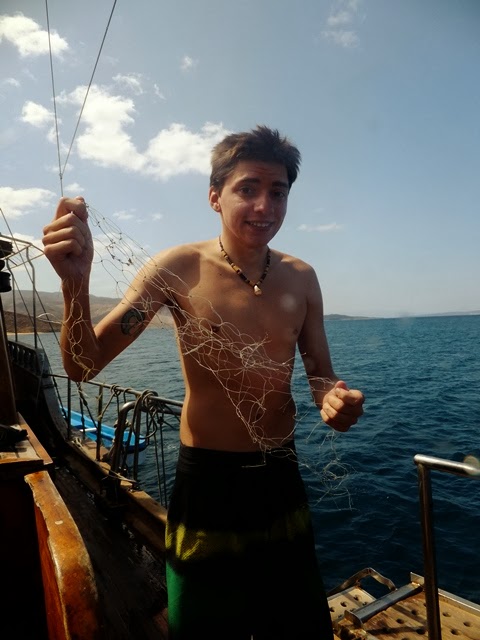 Savi with the net he successfully removed from dji.2007.018

Needless to say, these two weeks were physically and mentally exhausting but every second was worth it (even if at some points you are recording and not chasing these spotty friends). Sadly we didn’t see a baby whale shark though we managed one at around 1.75m who was trying his hardest to active surface feed. Who knows what next year brings? I’ve got some ideas but that’s for another day when all is set in stone. For now however, enjoy more photos and musings from the rest of the team. 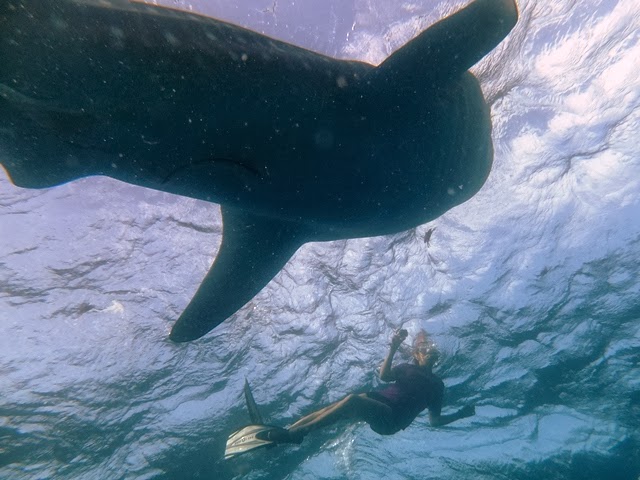 Erica has an easier time with the suction feeding puppy! 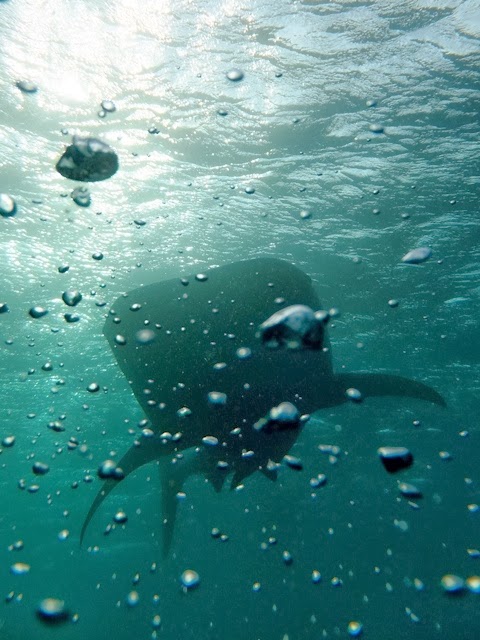 Carrying on from Savi’s tale, and his pertinent reference to the minimum distance rule in the code of conduct, which these sharks seem to be completely indifferent to when it comes to feeding time, David had more than a few ‘situations’ of his own to contend with particularly from two small individuals who became known as the terrible twins! These two young male sharks, of 2.5 and 3 meters respectively, seemed to be pretty inseparable which became an issue when trying to collect left and right side photo IDs as sometimes the space between them was pretty small! 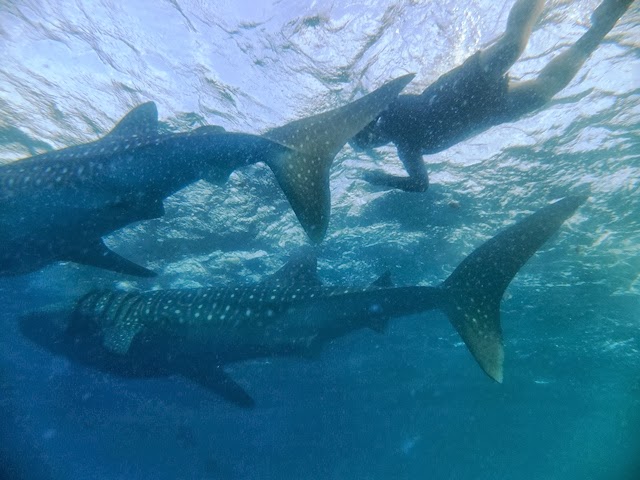 David cautiously gets between the twins...

While getting IDs from just one side is acceptable, we always try to get both sides at the same time….  so some patience, determination and a fair bit of luck was needed to get between them, get the pictures and get back out without getting more than a little sandwiched! But in the end David managed and survived unscathed…. 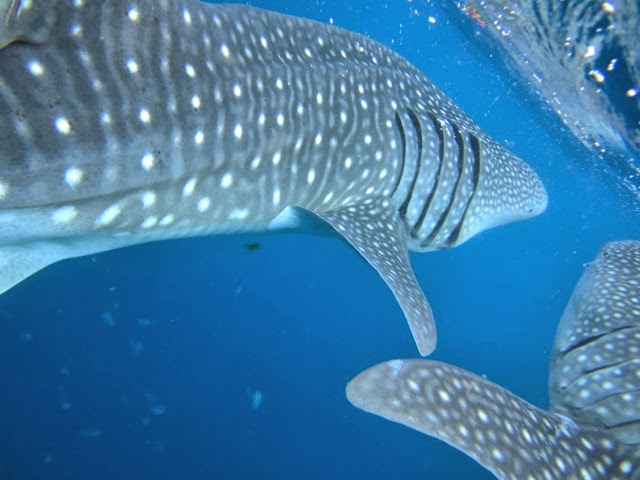 The resulting ID of the twin on the left... not too shabby!
Posted by The Marine Conservation Society, Seychelles at 2:01 PM No comments:

It’s the first week of January so it has to be time for whale shark in Djibouti! This year we are a week later with our annual expedition which gave the team time to celebrate New Year ’s Day at their  respective homes… but we are here now!

Djibouti once again has not disappointed with lots of sharks around and this year they are thankfully not accompanied by the somewhat irritating and spiteful swimming crabs; apparently the crabs spawned in December and are now almost non-existent in the area. 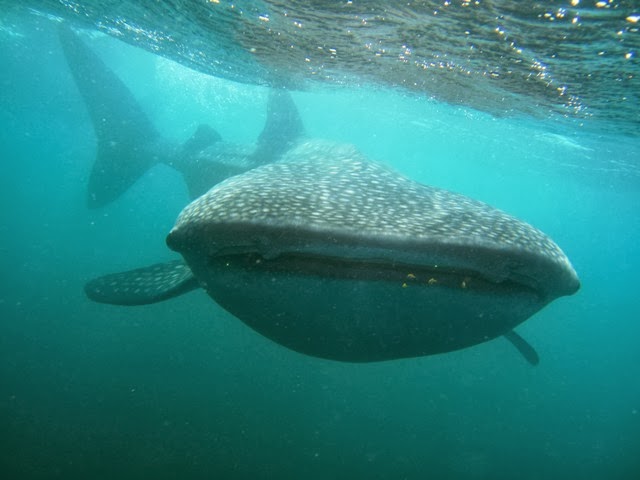 OK the encounter code says don't swim in front of the sharks but try telling them to stop checking us out!

David’s team this season comprises MCSS senior researcher Dr. Jo Bluemel and MCSS Scholar Savi Leblond (both well experienced in Seychelles whale shark programme) along with volunteer Nicolas Kiechel from Megaptera. Week one has been a bit of a baptism of fire for this new Djibouti team. The concept of one minute encounters and multiple sharks on an encounter has been a bit of a shock to the system; as has being barged out of the way by a young feeding shark while you’re trying to get your ID photos of another! Also the physical exertion of trying to keep up with ram feeding sharks at full tilt and then heaving yourself over the side of a fibreglass boat that seems to grow taller every time you get back to it, certainly take their toll! Rush hour Djibouti style... now which one was I taking ID photos of?

But week one has been successfully completed and we are back in harbour safe and sound with several thousand images taken of 300+ encounters… it will take some while before we get these run through the photo ID system to find out how many individuals this is, but it’s been busy! Of particular interest is the return of Shiraz, the shark David put a satellite tag on in the first scientific expedition in 2006, so we will keep an eye open for him during the coming week. 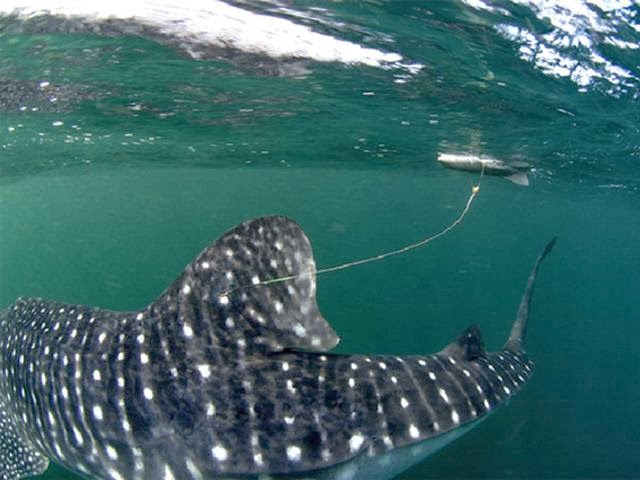 This was Shiraz in 2006 with his SPLASH tag attached...

We now have 18 hours down-time at the local Sheraton hotel before heading back for another week with Djibouti’s spotty sharks!

Here’s  Savi’s perspective on the trip so far…

Djibouti: once thought to be exclusively a large beach with barren land resulting from volcanoes… for a marine enthusiast such as myself however, its ecstasy delivered just not in tablet form. Since 2011, I have been addicted to the world’s largest fish- the oddly elusive whale shark. Intangible to most as it may be, it makes sense for the whale sharks to aggregate prolifically in the Indian Ocean to feast on the plankton, as well as at other plankton heavy locations throughout the globe.

Though being warned about the amounts of encounters I could not prepare myself for these numbers. Even after 5 days of “sharking” I’m in astonishment at the end of each encounter. One cannot compare the Seychelles aggregation to those in the Gulf of Tadjourah but breaking 100 encounters in two days was a milestone of its own set in the choppy seas of these Arabian waters.

One exceptional afternoon with caudal fins, dorsal fins and heads popping out of the water everywhere, the adrenaline starts pumping  and the shark chase begins. Fast, slow, large, small, adorable, feeding, bellends and shy sharks; whatever the description for the individual it’s our job to capture him/her with the digital power at our finger tips. Encounters in multiples occurred as exhausted swimmers clamber back on board the tiny wooden vessel and they rack their brains for the abundant amount of information which has literally zoomed past them. Not a moment’s pause before spotters are back in the water swimming (if not slightly drowning between sharks in Beaufort scale 3-4 waters) capturing all the necessary information (anything from swimming to vertical, suction, ram or active surface feeding, male/female, length, etc…). Long story made somewhat short; 61 encounters were had within 2 short (or long depending on your perspective) hours.

Through the power of three spotters a session (morning and afternoon), as many individuals as possible are captured and their identity will be learnt throughout the upcoming months as the images are run through I3S. Those avid readers of the whale shark blog are well aware of the system but for those new fans out there, it’s a program whose algorithm allows digital matching of spot patterns which we then confirm visually. I would describe all processes (swimming, capturing data, recording and transcribing before organizing and finally checking) to be quite fun, though others would just slap me across the face for being so naïve to the manpower and hours necessary to complete the tasks at hand (much like the 2 meter male whale shark who didn’t appreciate the high winds and boat being too close who considered slapping me from head to toe with his caudal fin repeatedly to be the optimal action). Then again, we all like our personal space don’t we?

Anyways, after a few sunburns, breaths which involved not much air and more sea water than I would have liked, massive sprint exercises and breath holding exercises (for those sharks who are a bit shy about having a human check out his or her goods) and pull ups to quickly and “efficiently” reach the recorder before having all details flood out of his brain with the copious amounts of sea water; I would like to say that yet again I am in my element once again and am literally having the time of my life. Enough typing and reading now as I’m sure those reading are more interested in the photographs anyways. Here are some to make those readers jealous (err…informed). 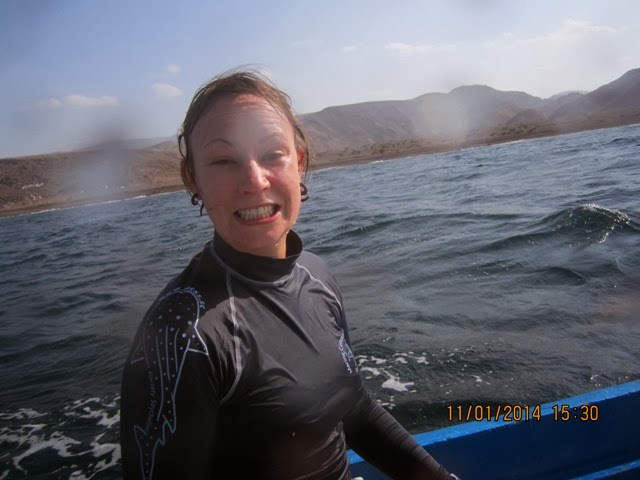 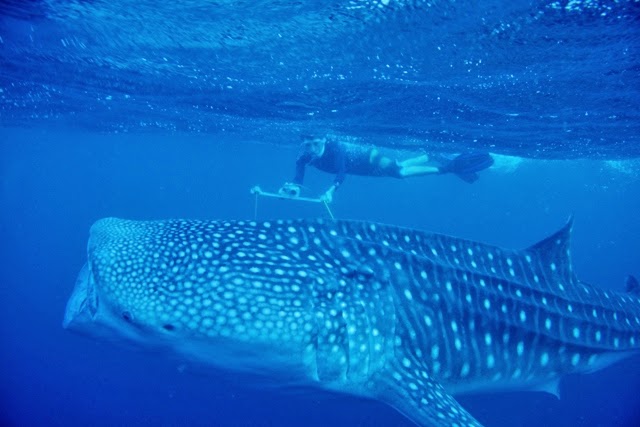 This is me at work, lasering these amazing sharks... 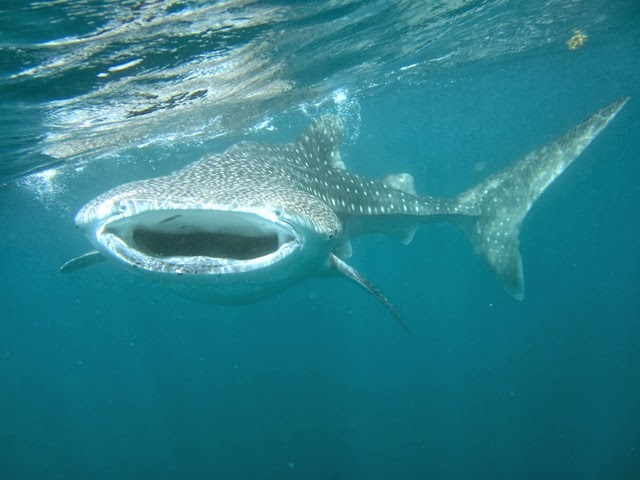 Why do you keep pointing those annoying green lights at me?
Posted by The Marine Conservation Society, Seychelles at 7:52 AM No comments: