New Year... It Must be Djibouti!

As Christmas recedes and another New Year rapidly approaches, a small but significant migration is occurring towards a tiny country in the North East of Africa... Yes, it’s the Djibouti whale shark monitoring programme time once again and whale shark experts and enthusiasts from all around the world are beginning to make their way to this intriguing country. 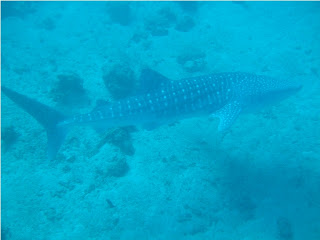 One of the very small whale sharks found at Djibouti.
This whale shark aggregation is unusual in that the juveniles found here are significantly smaller than in every other known aggregation of whale sharks, with an average size of around 3.7 m, which would make them probably only 2-3 years old. 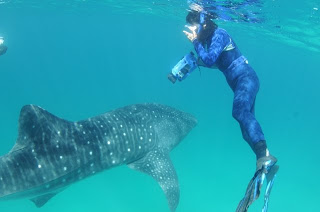 Flora being investigated by a curious youngster

Djibouti straddles the intersection of three of the world’s tectonic plates, the Arabian, African (Nubian) and Somalian continental plates, which are slowly pulling apart. This intersection of the African and Somalian plates continues south into East Africa as the East African Rift Valley, while the junction between the African and Arabian plates goes north forming the Red Sea. It is off Djibouti, where all three meet and form a steep sided inlet of the Indian Ocean, which is the area where juvenile whale sharks seasonally aggregate in large numbers. 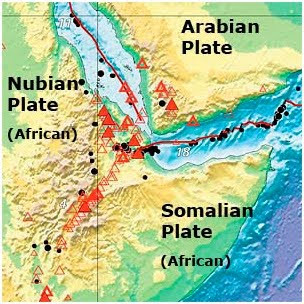 Djibouti at the junction of the three continental plates.
The Programme was initiated as a joint project between MCSS and Megaptera in 2006 and this year the programme is being led by Gareth Jeffreys, Team Leader for MCSS in Seychelles and currently studying for his PhD on the morphometric measurement of free swimming whale sharks; the Djibouti aggregation is an important group in his research on growth rates in known individuals. Currently, MCSS and colleagues from Megaptera have identified some 348 individual whale sharks from this aggregation and Gareth and team hope to add to that number over the coming three weeks. 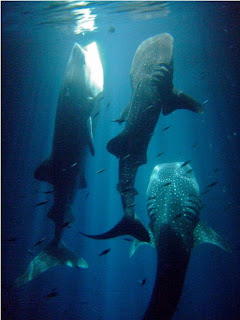 Three whale sharks feed under the boat lights in Djibouti
Gareth will be assisted by wife Laura, also working at MCSS on her PhD on the Anthropogenic issues of protected species, and Darren Whitehead, an MCSS team member, about to start his MRes studying whale shark interactions. They will be joined by Daniel Jouannet and Michel Vely, the experienced Djibouti experts from Megaptera, to make sure that everything goes according to some sort of plan!

A number of old friends will be joining the expeditions as well as some new to the area. The first of the three seven-day expeditions sets off on December 31st so we look forward to hearing from the team as the mission progresses....

We wish you all A Happy New Year!
Posted by The Marine Conservation Society, Seychelles at 3:57 PM 1 comment: