Quite a few old friends!

Well week two has come and gone and very successfully I have to say! The team had the Deli all to themselves along with Didier, a volunteer from Megaptera, and Hussain Al Qallaf, a veteran of two previous Djibouti whale shark expeditions. It’s always good to have Hussain aboard as he is definitely ‘Mr. Gadget’ and has all sorts of things you thought about packing but forgot to! He also has enviable skills with a camera and a formidable camera system, so we were able to get some excellent images this week to illustrate this blog. 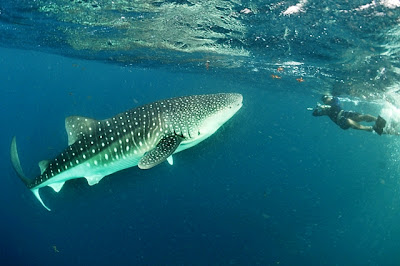 Darren getting laser measurements from a feeding shark, photo Hussain

The sharks again did not disappoint although the swimming crab infestation seemed to hit astronomic proportions… it also seems as though the early shark catches the crab eggs as we found several gorging themselves on a thick red crab-egg soup one morning. 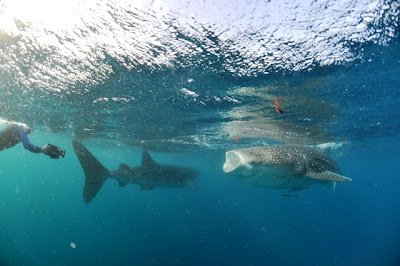 We also had several old friends in the shark department returning to visit; this  included three sharks we had previously had satellite tags attached to, one from each of 2009, 2011 and 2012. All of the sharks carried tag tether remnants advertising their importance to whale shark science! All three of these animals had been tracked as far away as the Red Sea and the Indian Ocean, so it’s good to see them coming back again. 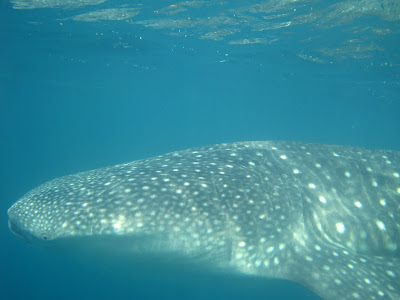 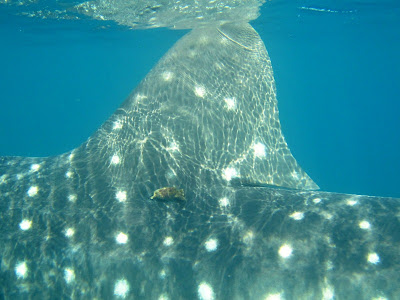 One of our 2009 satellite tagged sharks with his tether remnant.

During the week we had several tourist boats pay the area a visit but they were largely well behaved; however, on Friday morning there were a total of 15 boats with whale shark tourists aboard in the aggregation area, each with from 8 to 16 people aboard… I don’t know how the sharks felt about it, but it was pretty scary from a human point of view, in terms of safety from speeding boats, all intent on getting to the next available shark. 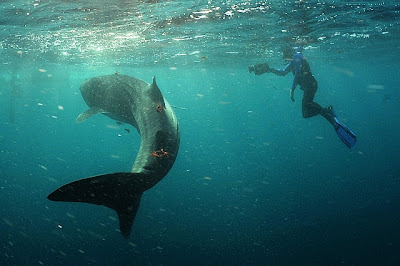 Week three looks as though it will be similar to week one with one skiff on whale sharks and one with divers so fingers crossed for a good final week!

Posted by The Marine Conservation Society, Seychelles at 11:58 AM 1 comment:

As the New Year gets underway, a small team from MCSS is once again visiting Djibouti to document the annual aggregation of whale sharks found around the Arta area of the Gulf of Tadjourah. This is the fifth annual expedition organised in conjunction with Megaptera, a French NGO, DECAN a local NGO and Dolphin Excursions, the owners and operators of the MV Deli, the base of operations for the three weeks.

The first week was one of mixed fortunes, we certainly managed to find whale sharks and capture lots of identity pictures but this was done only after running the gauntlet of killer swimming crabs! We have had encounters with these prickly little critters in previous years but nothing quite like this…. 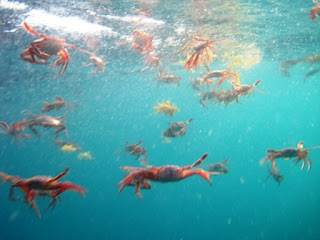 The massing prickly terrors of Djibouti!

There were literally thousands of crabs all around the Deli at night and all over the areas where the sharks were during the day. Why, we aren’t exactly sure as these crabs are not plankton feeders, maybe they are cultivating the taste for human flesh as they certainly seemed intent on nibbling at every swimmer as they got into the water.

What has also been notable again this year are the number of sharks with serious injuries almost certainly caused by the propellers from the ever increasing number of boats carrying tourists out to swim with the sharks. 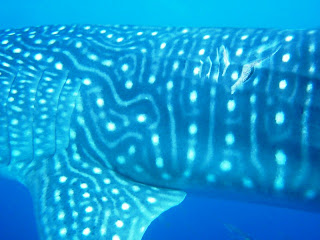 'Flash Gordon' so named after suddenly acquiring this 'flash' courtesy of a passing tourist boat during the first week...

The sharks seem to tolerate, to some degree, the somewhat blatant intrusions of swimmers that largely ignore any form of encounter code and simply dive away when the intrusion becomes too much. However, it does bring to mind the situation found in other areas of tourism over-exploitation and when this continual disturbance will cause the sharks to avoid the area for a more peaceful life… 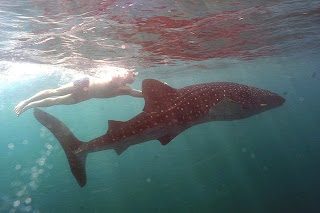 Week two is looking interesting as it will be just the team and old friend and avid whale shark enthusiast Hussain Al Qallaf… we look forward to  lots of incredible photographs!

Posted by The Marine Conservation Society, Seychelles at 10:39 AM No comments: