After several weeks of little action on the Indian Ocean whale shark front, this week brought two pieces of news…. The first being that the first whale shark of the Seychelles’ 2010 season was sighted, and the second that the PAT tag attached to Sammy, the whale shark released from a Dubai aquarium, has popped up in the Arabian Gulf.
The first Seychelles whale shark for the season was recorded by volunteers diving with the Global Vision International project on Friday 4th of June off the ‘Lighthouse’ / Grouper Point on NW Mahe. The animal was around 5 metres in length but swam off before photos could be taken to identify it; everyone is now on the look-out for more even though this is early in the season….
The news about Sammy’s PAT tag was released by the Mote Marine Laboratory who have been acting as scientific advisors to the Atlantis Resort in Dubai where Sammy was kept in an aquarium for 19 months before her release. Mote Marine Laboratory are also closely involved in the husbandry of the whale sharks kept in the Georgia Aquarium
In the press release Dr. Bob Hueter comments that "After Atlantis staff tagged and released her off Dubai, the whale shark took a mostly westward path through the Arabian Gulf, traveling south of Iran and then curving southward to waters off the coast of Qatar, ending up about 348 km west of her starting point."
The PAT tag stores data based on light levels and dawn and dusk times that enable researchers to develop a rough indication of the shark's position thus allowing a track to be plotted. 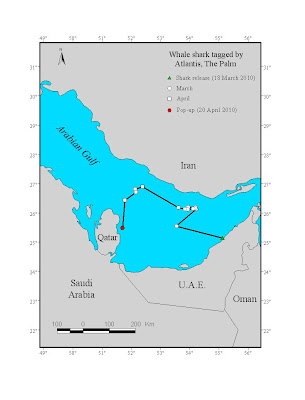 The geo-location track of Sammy's journey after release from Dubai; courtesy Mote Marine Laboratory
Data from the tag on water temperature and depth, showed that the whale shark came to the surface at least once each day, and made dives down to 72 meters (the Arabian Gulf's average depth is 50 meters and its maximum depth is 90 meters.) Temperatures of between 22.6 and 26.8 degrees C were also recorded.
The PAT tag was programmed to release 100 days after deployment but released on April 16th after only a month on the shark; the reason for this premature detachment is unknown but is not uncommon for tags on this species.
Posted by The Marine Conservation Society, Seychelles at 3:08 PM No comments: