Its five months since we came ashore from the Djibouti 2010 research expedition and we are now beginning to get some final summary results out from the Data, due largely to the hard work of Abi March (our current I3S Queen) who painstakingly completed the spreadsheet data entry and the sorting and matching of the photo IDs. 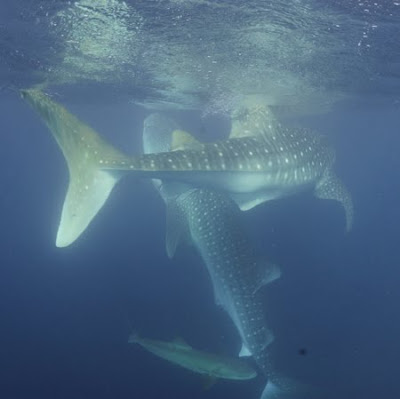 Multiple whale sharks are common in Djibouti; photo Hussain Al Qallaf
Overall there were 871 in-water encounters recorded with 96 individual sharks over the 11 days of in-water survey. Of the 96 individuals, 53 had been identified in previous years while there were 43 ‘new’ sharks. Of the 96, 32 individuals were seen on only one day, the other 64 were seen on multiple days, on average 5 days with one individual seen on a maximum of 9 days.
86 of the sharks were sexed with 81 (94%) being male and only 5 female (6%); sex was not established for the remaining 9 individuals. 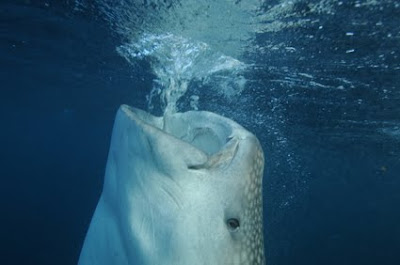 A whale shark vertical feeding; photo Daniel Jouannet
During the first week there were a total of 387 encounters recorded with 80 individual sharks being identified. On average, 11 additional individual sharks were identified each day above those identified on previous days during this week with an average of 4 sharks leaving the aggregation each day during this period.
In the second week 484 encounters were recorded on a total of 66 individual sharks. During this week only an additional 3 sharks were identified above those from the previous days with an average of 9 sharks per day leaving the aggregation during this period.
This data is being further analysed to update the population estimates for this area and it is hoped that this will be available before the end of the Seychelles whale shark season (so around October).
The dates for the 2011 Djibouti expeditions have now been set:
December 31st - January 6th, January 7th - 13th, January 14th - 20th 2011 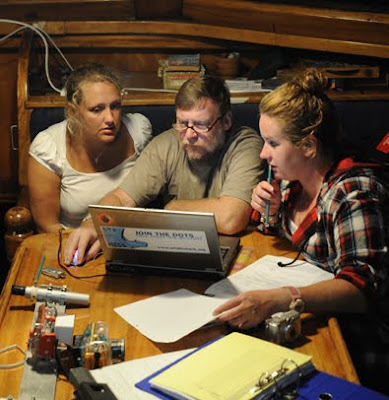 David with Abi and Ciara pondering the days results aboard MV Deli; photo Hussain Al Qallaf
We are organising this expedition jointly with DECAN, a Djibouti NGO and Megaptera an international NGO. As before, the expedition will be based aboard the DELI, a two-masted live-aboard dhow of 26m. Costs per person are Eu1150 per week excluding air-fares; costs include airport to vessel transfers, full board accommodation sharing a cabin on the Deli, as well as accommodation at the Djibouti Sheraton for the last night of each trip. Several post-trip excursions are available at additional cost, such as a trip to Lac Assal or to the DECAN Cheetah Sanctuary. 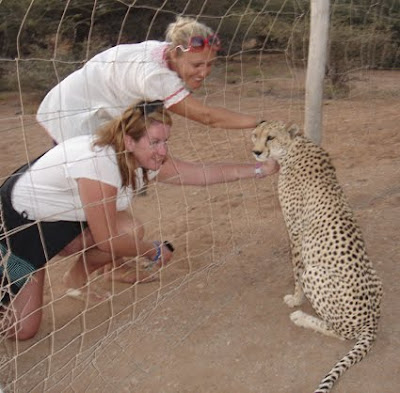 Ciara and Abi getting a fur fix from a friendly cheetah at the DECAN sanctuary; photo David
There is also the opportunity for an extension to work as a volunteer at the DECAN cheetah and wildlife sanctuary either before or after the expeditions; For further information please visit the MCSS web site and download the info sheet and application form…..
Fancy meeting lots of whale sharks over the New Year?
Posted by The Marine Conservation Society, Seychelles at 5:41 PM No comments: