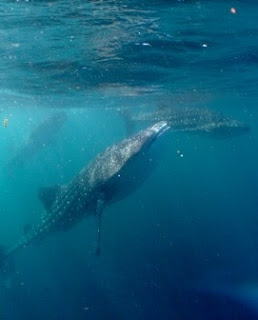 MCSS are pleased to announce the launch of their first formal public courses on their signature species, the whale shark. These five day courses are aimed at giving people with an interest in the world’s largest living shark the opportunity to learn more about its ecology and biology as well as some of the standard techniques used in monitoring them.

The courses are organised by leading whale shark researcher Dr. David Rowat and will include five mornings of presentations, tutorials and workshops with four afternoons spent putting the theory into practise with the MCSS whale shark monitoring programme and meeting these sharks up close and personal! The programme has been set up by MCSS using the services of local hotels, boat/dive operators and ground handlers so that all participants have to do is sign-up and the rest will be taken care of! 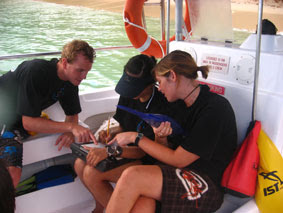 A standard six night package has been organised that includes accommodation at a local hotel on bed and breakfast basis, airport-hotel-airport transfers, the whale shark course and four monitoring trips from Euro 1575 per person sharing.

Three courses are planned this coming whale shark season for a maximum of seven persons per course:

In addition, extensions of the programme are available to extend your stay with a week’s diving or a learn-to-dive package with MCSS supporting partner the Underwater Centre.

Full details of the standard package and some of the extension options are available from the MCSS web site.
Posted by The Marine Conservation Society, Seychelles at 1:13 PM No comments: 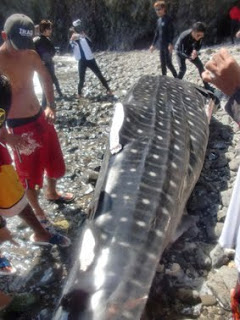 Shocking news came this week from WWF in the Philippines about the finning of a whale shark; finning is the practise of cutting of the fins from a live shark and then throwing the mutilated but live carcass back into the sea. Generally this is done with small pack or reef sharks but now the practise has spread to the world’s largest shark the whale shark.

On February 15th divers from Acacia Dive Resort, Mabini, found a 5.5 m badly mutilated but still alive whale shark floating belly-up amidst the rough waters off Bahay Kambin, Tingloy, Southern Philippines. Both dorsal fins and both pectoral fins had been cut off and there were numerous gashes around its tail fin indicating that an attempt had been made to cut its tail off as well.

The shark was towed to calmer waters in nearby Caban Cove, where efforts were made to support the shark on a net strung between a bamboo frame, to stop it from rolling over onto its back; however, the shark was very weak and it died that night as a result of its injuries. 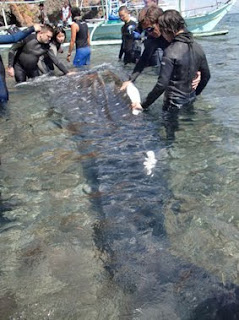 For several days fishing boats equipped with powerful flood lights - reportedly from Lemery, Batangas - had been operating in Mabini waters, but had left after police moved them on after complaints from local resorts. Several nights later the fishermen returned, this time in the adjacent municipality of Tingloy. This time they were not moved on the area was under Tingloy’s jurisdiction not Mabini’s. The fishing went on until concerned divers informed Mabini of the grisly discovery.

Filipinos hunted whale sharks for decades in the waters off Bohol, Misamis Oriental and Sorsogon. Shark fins and meat were exported to China, Hong Kong and Taiwan. But declining numbers and a cooperative campaign saw an end to the killing with legal protection for the species in the Philippines in1998.

The Bureau of Fisheries and Aquatic Resources Director Malcolm Sarmiento said a full investigation will be conducted to find and prosecute the culprits. Sarmiento has committed BFAR’s support until a better enforcement strategy can be developed between the twin towns of Mabini and Tingloy.

WWF-Philippines and the Bureau of Fisheries and Aquatic Resources (BFAR), have also announce a reward of P100,000 to any person who provides information leading to the identification and arrest of the parties involved in the mutilation and de-finning of the Tingloy whale shark.

This tragic incident was all the more poignant as it came right after the conclusion of the Sharks III meeting held in Manila from 8 to 12 February, which was the third meeting to develop a global agreement on the conservation and management of Migratory Sharks under the Convention on Migratory Species….. more on this in a coming post.

Our thanks to WWF Philippines for the information used in this report
Posted by The Marine Conservation Society, Seychelles at 4:05 PM 1 comment: