Colleagues from the African mainland contacted us this weekend worried about an article that appeared recently in a Kenyan newspaper about the East African Whale Shark Trust. Apparently they have netted off a 500 metre enclosure at Waa on the south coast of Kenya between Diani and Mombasa and are planning to capture two whale sharks to put in this “sanctuary” for tourists to swim with.
“The purpose of having a sanctuary is two-tiered. It will generate revenue from tourism that can be re-invested in the conservation of whale sharks through awareness campaigns and establish a research centre and a potential breeding programme” the article says.
The article says that a captive programme is necessary because of the high number of whale sharks being killed off the Kenyan coast “EAWST founder Volker Bassen says the threat to whale sharks has increased over the years, resulting in a dramatic decline in the population of whale sharks (known locally as papa shillingi) off the coast of Kenya as they are killed for their fins and livers. In February 2008, a reported 42 whale sharks were killed off Pate Island in just that month.The fins are sold abroad and their livers are used to make liver oil, which is used to protect wooden boats from ship-worms and other degradation.”
Similar netted enclosures are found off Japan and China, as aficionados of XXXXX may recall from the krill filled fish-net shorts sequence, but these are generally low budget affairs catering for local tourism. 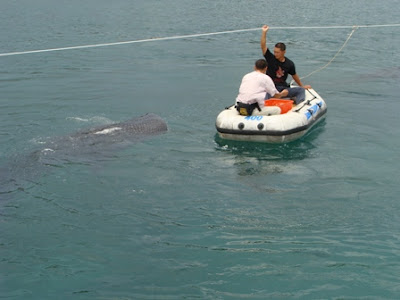 Whale sharks in a netted enclosure run by local fishermen in China...
The whole subject of keeping large pelagic sharks such as whale sharks in captivity tends to bring mixed responses; the Georgia and Okinawa aquariums have been able to justify their specimens based largely on the research carried out on these individuals. However, there seems to be little to support this in the proposed project; similarly whale sharks have never been seen breeding, let alone bred in captivity, and with the majority of sharks off the Kenyan coast being admittedly juvenile a captive breeding programme is pretty fanciful…. 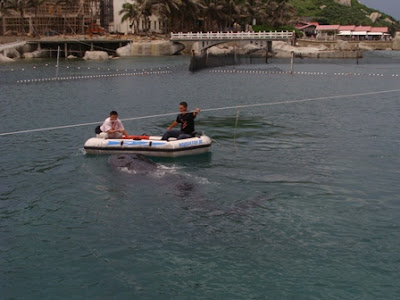 Feeding captive whale sharks can also be a major problem...
More information can be found in the Kenyan Nation article.
Add your view in our POLL on keeping whale sharks in captivity in the bar on the right!
In other news, here we are at the beginning of April and already two whale sharks have been reported by one of our research boat captains off the South of Mahe…. Fingers crossed for a good Seychelles season in 2012.
Posted by The Marine Conservation Society, Seychelles at 7:04 PM 1 comment: