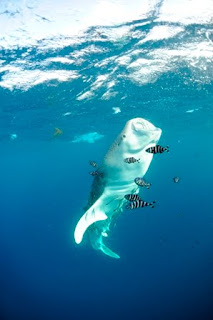 Well after many months of hard work the raw figures are at last in!
Djibouti 2011 was indeed another record breaking season for MCSS, not only was it the first three week programme planned to this remarkable area, but it yielded the highest numbers of sharks and encounters recorded yet. In total 114 sharks were individually identified during the three six-day expeditions from a total of 1236 encounters! One shark, a female first sighted in 2009, was seen on 13 of the 18 days of monitoring.
As you can imagine working through this sort of volume of data was a Herculean task; sorting the large numbers of digital images alone that accompanied each encounter, sometimes as many as 60 images from a single encounter was an epic task in itself. For this we are grateful as ever to Team Leaders Abi March, Ciara McCarten and Gareth Jeffreys for their huge contribution on site and to Abi for her dedication after the expedition to sort out and run each encounters' photos through the I3S matching software. 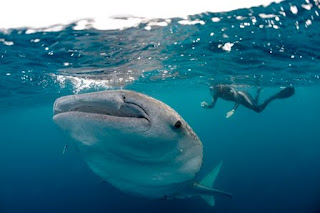 Also deserving of our thanks is MCSS volunteer Inga Petelski who has been assisting us since the beginning of March and who has had the un-enviable task of digitising the hard copy encounter sheets for each day into our Djibouti data-base. The highest number of encounters recorded in a single day was 148, with three days exceeding 100 encounters, so it was indeed a very busy season for the team!
The other data sources are also becoming finalised; both of the two Wildlife Computers Mini-Pats successfully detached and transmitted their data, one after two weeks of deployment and the other after 12 weeks. Both tags popped-up fairly near the sites where the sharks had been tagged but we are waiting to see what the data tells us about their movements during the period of tag deployment.
Also in are the data from the plankton tows which were analysed by Dr. Dave Conway at the Marine Biological Association of the UK, Plymouth; he has given us a full taxonomic breakdown of the samples along with size classes for the most common species. As in previous years there were large numbers of big fat Chaetognaths (Flaccisagitta enflata) as well as a lot of gelatinous material from pelagic tunicates (Larvaceans). 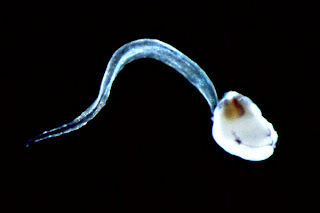 Pelagic larvacean similar to those in our plankton tows
He also analysed two whale shark ‘poo’ samples for us that we were fortunate enough to collect and found that they both had large numbers of chaetognaths (and chaetognath teeth, as the bodies had been digested) and surprisingly large numbers of crab larvae. We had noticed that on several days there were massive numbers of swimming crabs present which we presume must have been spawning, however, the straight plankton tows captured very few of these larvae.

The arrow worm or Chaetognath was common in all samples, including the 'poo'!
So there is still a load more work to do on the analysis of the data but the raw data is now compiled and we look forward to teasing out its secrets!
Posted by The Marine Conservation Society, Seychelles at 1:48 PM 1 comment: