Sammy Is Free… At Last! 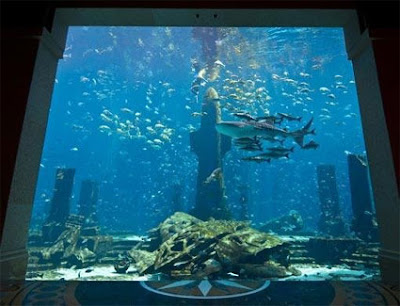 Sammy the whale shark has finally been released from the Atlantis hotel aquarium in Dubai.

The juvenile whale shark was ‘rescued’ on August 20th 2008 when she was found 'struggling in shallow water'. The hotel say that the shark was put in the aquarium for "medical care and observation" and that they would release her, but that release has been a very long time in coming.

In the intervening 19 months of captivity there has been a huge outcry from the public living in the region and from outside with a “Free Sammy” campaign on FaceBook and numerous articles written about the situation in local newspapers and featured on this blog.

It was somewhat ironic that the first Arabian Whale Shark Research Programme conference was held in Dubai in December last year, but Sammy still languished in captivity.

While Sammy’s ‘rescue’ and ‘recuperation’ at Atlantis was marked with great publicity and encouraged a constant stream of visitors to the hotel, her release was done with a significant lack of publicity, in an almost clandestine manner. None of the media or environmental community had been notified or were on hand to see the shark released and no pictures of her release have been published. 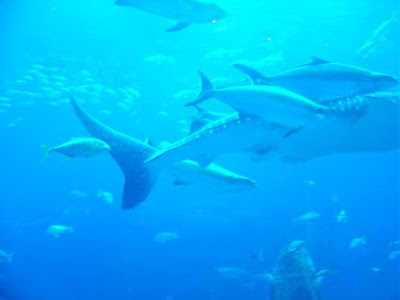 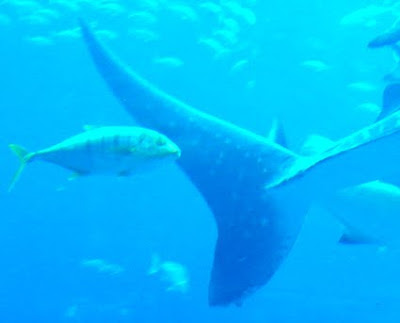 Sammy photographed in December 2009 with her pack of Cobais in constant attendance, and in close up her damaged and deteriorating lower caudal fin
Steve Kaiser, curator of the Atlantis exhibit told local media that Atlantis were pleased to be a part of research into this species and that Sammy would be tracked through a tagging programme to provide further information for the research community.

So let us hope that this is at last a happy ending to the story of Sammy the whale shark, and that she was not released due the catastrophic publicity her death in the tank at Atlantis would have caused. We look forward to seeing Atlantis publicise her location and movements over the coming months….
Posted by The Marine Conservation Society, Seychelles at 1:02 PM 1 comment:

The Memorandum of Understanding for the Conservation of Migratory Sharks under the Convention of Migratory Species (CMS) came into force on the 1st of March 2010, marking the successful outcome of three years of hard work for many people.

The final form and text of the MoU was agreed during the Sharks III meeting held in Manila, Philippines between the 8-12 February, and was the third meeting held between member states of the CMS and interested parties to develop an international instrument to conserve migratory sharks. 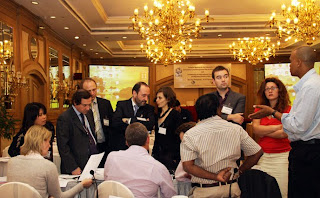 Heated discussions during the drafting of the text at Sharks III
This process started in November 2005 when Seychelles, Australia and New Zealand proposed that an instrument should be developed at the eighth Council of Parties (COP) in Kenya. The first meeting, Sharks I was held in Seychelles in 2007 and saw the ground work laid for further development basing its work on the listed shark species in Appendix 1 & 2, the whale shark, basking shark and great white shark. It was hoped that this would be finalised at the next COP (COP 9 Rome December 2008) but progress had not been sufficient and a second dedicated meeting was held immediately after the COP.

However, at COP 9 the shortfin and longfin mako sharks, porbeagle shark and the spiny dogfish (northern hemisphere) were all added to Appendix II, thus adding species which were commercially harvested to this appendix and consequently potential species for the Migratory Sharks agreement.

This brings us to Sharks III where the debates were long and at time heated. There were actually two elements that required much discussion: firstly whether the ‘new’ sharks species should be considered in the MoU, and secondly, the development of the Conservation and Management Plan (CMP).

After some very long debates the consensus was to include all seven currently listed species, but not to have automatic inclusion if new sharks were listed on the Appendices of CMS. This decision will thus enabled signatories to the MoU the possibility to choose species that are not listed on the CMS Appendices. 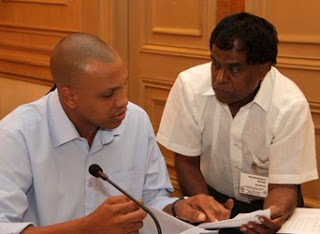 Delegates from Seychelles and Mauritius discuss the text at Sharks III
As ten countries were prepared to sign the MoU at the end of the meeting, this meant that the instrument would come into force on the first day of the following month, March 1st 2010. The Memorandum is now open to signing by any country that so wishes and will hopefully herald a new era in the conservation of this ocean ranging sharks.
Posted by The Marine Conservation Society, Seychelles at 6:58 PM No comments: