The results are in! Role on Djibouti 2016

It is now official! Djibouti 2015 was another epic expedition! The two five-day monitoring sessions netting us a total of  323 encounters with a total of 55 individual sharks, all identified by photo ID. 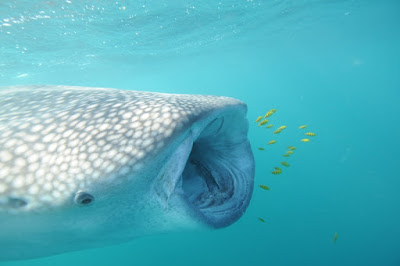 A happy little Djibouti shark, with friends!
Of these, 34 were sharks we had seen before in previous years while 21 were new to the programme,  that is close to 62% of site faithful sharks which we believe is the highest level in any aggregation currently studied. Not unsurprisingly the majority of the sharks we saw were male with only 3 female sharks found compared to 51 males (one individual was a bit too speedy and we did not get a reliable gender on it).

Most sharks were found either off the Foreign Legion Camp at Arta or 30 odd kilometres away in the far end of Ghoubet el Kharâb, the almost land locked ‘lake’ at the very end of the Gulf of Tadjourah. 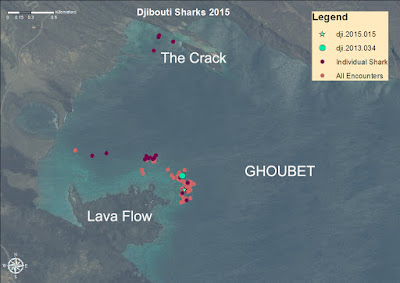 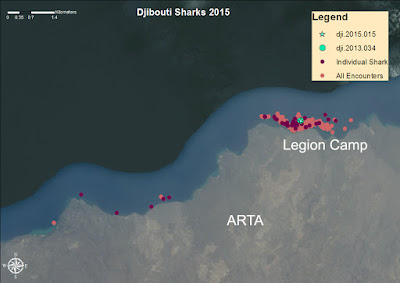 The locations of our January 2015 encounters

Interestingly two sharks found in Ghoubet were seen two days later off the Camp, having made the 31 km swim down! 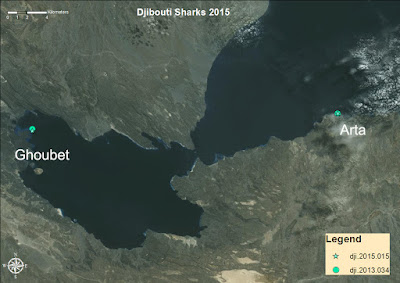 The 31 km swim undertaken in two days by two sharks!


Things are shaping up well for Djibouti 2016: once again we will be running two weeks starting on Saturday Jan 9th to Friday 15th and Jan 16th to 22nd aboard the MV Deli. The trip costs are Euro 1270 for divers and Euro 1150 for snorkelers, sharing a cabin with full board and inclusive of the last (Friday) night at the Djibouti Sheraton hotel. Divers have the option of doing a minimum of 2 dives per day depending on how much whale shark watching they want to do. Also available, but not included in the cost, is a land trip to Lac Assal on the Saturday after the expedition, a trip well worth doing!

Our thanks to Savi for the photo ID work, number crunching and map production!

Posted by The Marine Conservation Society, Seychelles at 7:51 AM